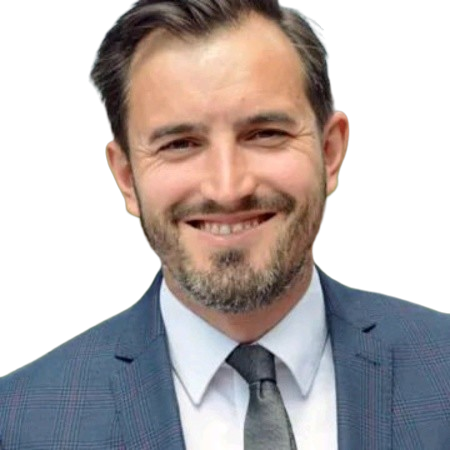 To ensure that it’s the former, you need Breakthrough Thinking behind you. This involves declaring what you’re going to do, reshaping expectations of what’s possible, and enrolling people in the transformation.

But no matter how well you execute these principles, you’ll come up against a problem: businesses aren’t machines, they’re made up of people. No matter how on board your people are, no matter how committed to the goal, they’re going to have other things on their mind too - even if they aren’t aware of them.

Left unchecked, these background commitments can make the difference between rocketing forwards or flying a few degrees to the left. The disparity may not be noticeable at first, but over time, it can make a great deal of difference to your final destination.

Let’s rewind. Before we can get on top of background commitments, after all, we need to understand what’s in the foreground: and that’s the breakthrough we’re collectively going for. To people on the outside, observing an innovation or transformation from afar, very often only seeing the end results, breakthroughs can occur as luck, accidents or the stars simply aligning. But having analysed countless breakthroughs in the world, we believe it’s possible to cause breakthroughs to happen by design and have codified a step-by-step process that typically plays out when breakthroughs have emerged.

The first step - which you may or may not have taken yet - is to determine the outcome you really want – not necessarily just one you think is possible to achieve. But if you want to achieve the seemingly impossible, that outcome can’t be elusive. It needs to be something solid. Something you can nail to the wall so everyone in your organisation can see it and get behind it.

Second, we need to separate the facts from our own interpretations and assumptions. Interpretations of past performance – such as “our organisation can’t be successful in that market” – may be justified and they may not be. But either way, our past-based assumptions can limit our scope of what we believe to be possible. Shedding ourselves of these shackles enables us to push the limits of what we can achieve.

Next, we must identify what is missing and essential. In order for breakthroughs to be achieved, you need to recognise where you are being driven by your incompletions (a perceived shortcoming in capability, resources or the circumstances being "right") instead of possibility. Context is decisive here - everyone has their own unique frame of reference which determines what they believe to be possible. But once you become aware of what’s influencing you, you can create an environment that supports the ideas, actions and relationships you need to create a breakthrough. Instead of being clouded by “this is impossible” we can pose fact based interrogations of “what is missing and essential to achieve this seemingly impossible vision.” With a little coaching you will be surprised how many truisms and interpretations that we all hold about what is missing and essential. You need to boil it down to only the true, hard-fact based missing and essentials.

The final step is taking action by making specific promises and requests. This means using strong and direct leadership communication, such as “I promise to” or “This is the request I’m making” and encouraging your people to do the same. You’re bringing breakthroughs to life through language. If everything up to this point is what aligns the mechanisms in your organisation, your promises and requests are what gets the cogs turning. Sure, making promises and requests sounds really simple, but it doesn’t matter how sophisticated our project management methodologies get or how polished our ability to give a keynote becomes, making promises and requests is pretty much the act of leadership. What sounds simple can in-fact be the work of a lifetime for even the worlds greatest leaders to perfect.

There is, unofficially, another part of this breakthrough “process”. It’s one you won’t find in many step-by-step guides. but it’s an integral part of the practice...

Much in the same way you can’t trek to the top of Everest expecting constant blue skies and sunshine, you can’t pursue breakthroughs without expecting breakdowns along the way.

The good news is that breakdowns can reveal what is really important to an organisation, and they can tell you what is really needed. A breakdown may even reveal that the objective you were originally committed to is not as important as another breakthrough you could be aiming for.

To resolve breakdowns, you first need to declare them. In some organisations, speaking up about what isn’t working may be interpreted as negative. But it is essential to identify and declare breakdowns if we want to overcome them.

Much like achieving breakthroughs, once we identify a breakdown, we need to separate the facts from our own assumptions. We might have set off on the wrong path, but that doesn’t mean it was a bad idea to begin walking. When we loosen our grip on our own ingrained interpretations, we can remove blame from the equation and build a new road to take us forward. When we ask ourselves; ‘what’s actually happening here; what are the facts?’ we can take action based on what’s possible, versus our story of what’s wrong.

Bringing background commitments to the foreground of conversation

Most breakdowns are caused by background commitments, and so uncovering them is vital. Background commitments are the less malicious, less intentional cousin of the “ulterior motive.” Whilst we say, and very often wholeheartedly believe, we are committed to one thing – e.g. the collective breakthrough we’re all striving for in our organisation - other “background” commitments we hold (either individually or as a group) are unconsciously stopping us from achieving the breakthrough we say we want.

For example, an already high-performing team that say they want to transform the way they operate and understand that it may result in some short-term slowing down in the level of productivity they can offer to their wider organisation, may think they understand and are okay with the potential for negative stakeholder PR that may ensue as a result. But there may be a background commitment across individuals on that team, that perhaps didn’t show up on the way in, to their love of being perceived as a highly productive team by the wider organisation and the renumeration bonuses they can command as a result of that stakeholder perception. Whilst in principal the team at large is committed to the longer term benefits of the transformation it was only when team members were more personally effected that it was possible to become conscious of this background commitment.

Our background commitments can be to tangible commitments like in the example we have just talked about, or it could be to things that are harder to delineate like our ego, our values or our winning moves. When it comes to our winning moves (the successful approach that has got us to where we are today, determined by what we typically listen for and why) our tried and tested strategies are likely to give us the same predictable results, which feels safe but doesn’t always allow us to cause breakthroughs. When you’re dealing with achieving the impossible, it’s worth loosening your relationship to certainty a little and checking in with what you listen for and why, to see if they hold some grip over you that could be limiting.

For example, if you’re always listening out for where the risks might be in a project so you can create the solution ahead of time, you might miss out on a time-sensitive opportunity in the market. In other words, your commitment to avoiding risk, might be stopping you from leaping towards an amazing opportunity.

Whilst we might never completely let go of our background commitments that keep us safe, we do need to reveal them in order to have a choice. And to at times abandon them completely and step boldly towards a different goal, or future.

One manager I’ve recently been working with realised he had long held onto a background commitment to always looking like he had the answer. He had been afraid of losing credibility in the eyes of those he led but recently realised this background commitment had led him to act in ways that caused the death of conversation, of exploration, of innovation. It was self-limiting by its very nature. By revealing the background commitment and by starting to act from a new commitment to be a multiplying leader, he’s now finding freedom in admitting when something’s missing, or he doesn’t know the answer. He’s finding that others are showing up more bravely and creatively around him and far from damaging his credibility, he’s found his impact is growing.

The bravery to achieve breakthroughs

In an organisation, there may be multiple background commitments at play in any given situation at once. It may be a question of personal ties (particularly in owner-managed businesses), a fear of the past repeating, or a matter of values. This last one is perhaps the most crucial. If a leader’s values or sense of purpose clash with the organisation, breakdowns will ensue.

Our own personal values will often win against the values of an organisation. So it’s important to ensure that we are partnering with organisations where there isn’t a cognitive dissonance there.

Similarly, for two organisations to commit to the same breakthrough goal, they may need to loosen their relationship to background commitments to “the way we’ve always worked.” These aren’t bad in themselves, but if they’re hindering a breakthrough, it’s worth considering how necessary they are.

Sometimes this isn’t easily done. But loosening our grip on our own background commitments for the sake of a collective breakthrough - and a bigger picture - is not only an act of great leadership, it’s an act of bravery.

Knowing is the enemy of growth

Don’t Make Predictions – Declare Your Own Future in 2022

Breakthrough Thinking Practice 1: Unhooking yourself from your assessments