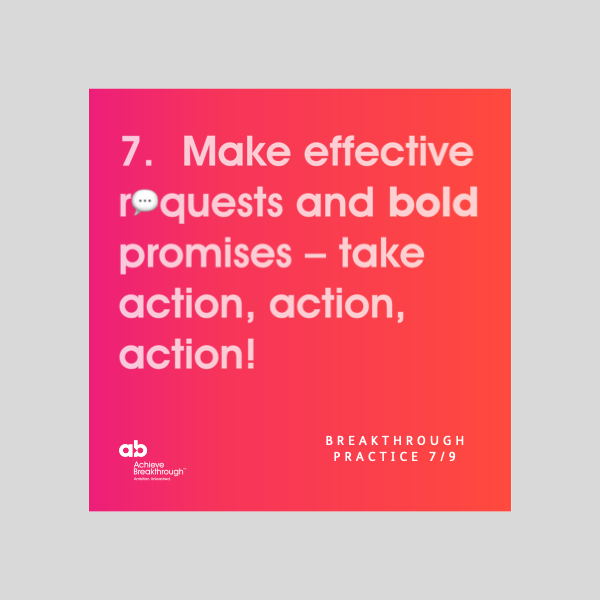 So far in this blog series we've discussed the six breakthrough practices:


Promises and requests: How to get your project back on track

It’s been said that the single biggest problem in communication is the illusion that communication has taken place. How many meetings have we been in like that? Where everyone seems to agree to an outcome, but no action follows?

A story of action on hold

Let’s say you and a group of leaders agree to put on an event in four months’ time.

Five weeks later, you meet with those same leaders, and no one has actioned anything. The date of the event is nearing, but you’re no closer to putting an event together. So you check with everyone: “Do you still want this event to happen?” And everyone says, “Yes absolutely, of course we should put this on.”

Then another three weeks pass and you meet again, but this time everyone feels a little sheepish. A little event admin was done since the last meeting and a few more people have vaguely said they’d be up for getting involved, but very little is locked in place.

You ask everyone, “Should we abandon the event?”

“No,” everyone says. “This would be a great opportunity.” A few people make suggestions about speakers, a venue, and an interactive session. You ask if they can make it happen, they say something along the lines of “we’ll give it a go,” There’s a sense in the room that you can still pull this event together.

And then three more weeks pass.

You meet together again, and everyone in the room feels very uncomfortable. A venue is booked, but nothing else. Someone tried to book a speaker, but they were unavailable. The person who suggested the interactive session hasn’t had time to plan anything yet, they’ve been too busy.

You’re now just five weeks from the event date. “Should we cancel the event?” you ask.

“No,” everyone says, “we’ve booked a venue already, and we might disappoint people.” Someone suggests an alternative speaker. The person planning the interactive session, who looks pretty defeated by this point, says they’ll try to get their side of things sorted.

What do you do next? Will anything have changed by the next time you meet? How do you break the cycle?

We’ve found that unless someone in a meeting has either made a promise by saying “I will achieve this by that date” – or unless they made a request of someone else and received a promise in return –  very little can be expected, no matter who says they are on board.

Promises and requests are the only two sources of action. They are rigorous, committed ways of communicating with each other. Without someone explicitly committing to time-bound action, you can’t expect action to happen. It’s as simple as that.

So, what exactly is a promise or request?

A promise is easy enough, it’s a spoken commitment to achieve something (what) within a time limit (by when).

A request, on the other hand, has four aspects that need to be defined: What, who, when and a response. What needs to happen? Who is going to make it happen? When will they do it? And finally, a response from the people singled out – which will be yes, no, or a counter offer. Without a definite response, the request isn’t complete.

It’s natural that people might need some reflection time before they can give an answer to a request. In these circumstances, a time limit is still needed. If somebody says “I will confirm by 5pm on Wednesday”, you have a clear, concrete timeframe within which to get a response. But a response along the lines of “leave it with me” is too vague.

You might think this is back-to-basics leadership, but you’d be surprised how many leaders don’t operate in this fashion.

Checking in for commitment

Let’s go back to the case of the event lost in limbo. Now this would have been a very different story if promises and requests were made from the first meeting. Everyone was vague in their time scales and commitments, and the person who offered to book a speaker gave up at the first hurdle instead of searching for an alternative.

People liked the idea of having the event, but no-one was willing to make a promise or request that would have resulted in definite action (e.g. “I will ensure we have a speaker by two weeks time”), but no one was willing to say “no,” either.

In this situation, it would be worth re-examining if people are still committed to the project. Let’s say you do that:

“We’re saying we want this event to happen,” you say. “But it sounds like we’re only up for it in principle.”

Some people nod, others look a little guilty. It seems like you’ve struck a chord.

“Does anyone want to commit to making part of this event happen?”

Everyone looks at one another. “Not really,” says someone. The others laugh.

“I say we cancel it. We’d be freeing everyone up to focus their energy elsewhere. I’ll do it today.”

Everyone else in the meeting looks incredibly relieved. Some people might be a little sad that the event isn’t happening – but not much. And it is in their gift to re-commit to this in future and drive the actions forward.

Empowered to say no

In these situations, where promises and requests are absent, it is often better for leaders to revoke a commitment. Otherwise, the commitment stagnates and becomes a delusion, even impacting our belief in ourselves and our team to make things happen.

It’s natural that people don’t want to be naysayers. We generally want to be positive, enthusiastic, and we want to show we are committed to the organisation. This can crop up a lot with purpose agendas. People may feel isolated or even morally questionable if they don’t commit to action surrounding a group purpose.

We’re trying to be noble, but we’re stopping people from saying what they’re actually thinking. And we’re leaving them to feel guilty when they don’t act.

A culture of promises and requests weeds out a default to please, creating an environment where people can talk straight without fear of judgement. It also helps to practice. We’d recommend leaders challenge their team to say no to something once a week, just to flex their “no” muscles. Over time become more discerning and confident – free to give a firm “no” to new responsibilities so that they can remain committed where it matters most.

Looking to get all of your projects on track? Get in touch to explore how we can help you ignite your ambitions.